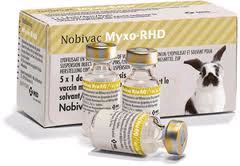 Vaccinations are an important way of preventing your pet from contracting very serious diseases.  We routinely vaccinate for two viruses in rabbits; myxomatosis and Viral Haemorrhagic Disease (VHD).

Myxomatosis is a disease caused by a virus. It was originally released into the rabbit population to control numbers of wild rabbits. The virus works by weakening the immune system allowing opportunistic bacteria to take hold, usually leading to death between 2-6 days after first signs are noted.  The first symptoms are often swelling of the eyes and genitals.  If your rabbit is unvaccinated and shows these signs, it is critical that you take them to the vet immediately.

Myxomatosis can be spread from rabbit to rabbit, on infected cage furniture or via the rabbit flea Spilopsyllus cuniculi. Due to the risk of spread via fleas, we recommend that all rabbits, even those that have no exposure to the countryside are vaccinated at least once a year, and preferably twice. If your rabbit is kept near an area that wild rabbits live, vaccination twice annually is a must.

VHD is an even more deadly disease, often causing death with no symptoms within 48 hours of infection. More worryingly, it can be spread on any clothing or footwear due to the resistant nature of the virus. This means that it is possible to give your rabbits VHD simply by walking in an area where wild rabbits have been.

We new offer a combined vaccination against both Myxomatosis and VHD, this is an annual vaccine and can be given from 5 weeks of age onwards.

Our emergency service is there for you at any time

Make an appointment with us today

Business hours - consults by appointment only.

Take a look at this month's