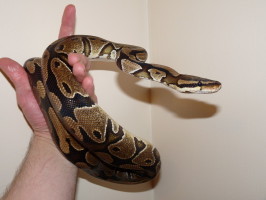 The royal python (known as the ball python in America due to the snake's tendency to curl up into a ball when scared) is a relatively small species that generally has a very docile nature. There are many different colours or "morphs" available with rarer colours being worth tens of thousands of pounds to breeders.

Royal pythons are shy snakes and prefer to hide in tight spaces during the day. They also tend to do better in relatively small enclosures.  A general rule of thumb is that if you add the length and depth of a snake enclosure, they should be no shorter than the snake itself.  Enclosures vary from glass-fronted wooden vivaria (3ft for adults) to racking systems with drawer-like enclosures.  Many people in the UK use Really Useful Boxes®﻿ with the smaller sizes being suitable for hatchling snakes and adults being comfortably housed in the 50 litre size. When using plastic tubs, it is important to ensure that sufficient ventilation holes are provided to keep the humidity at the correct level. This is equally as important for the opposite reason when using commercially available "faunariua" which struggle to maintain the humidity levels required for successful shedding.

Substrate is the name for what you put on the bottom of the enclosure. Many people prefer a natural look and opt for particulate substrates such as orchid bark, beech chips or shredded aspen.  All of these have their advantages and disadvantages with the former holding humidity almost too well and leading to "scale rot" and the latter two having the opposite problem and leading to shedding issues. Cypress mulch is a much more appropriate substrate but is often difficult to obtain in the UK.  Non-particulate substrates such as newspaper, kitchen roll and astro-turf are better suited to owners with large numbers of snakes and while less attractive, cause far fewer problems that any of the bark substrates.

Heat can be provided in a number of ways with heat-mats (either placed under the enclosure or on one of the walls) being of the most popular. Other methods include heat cable, ceramic heat lamp and spot bulb.  With any type of heated bulb it is important to protect the snake by installing a guard.  Royal pythons have been known to wrap around these bulbs burning themselves to the bone in the process.  Whichever heating method you choose, it is important to use a thermostat to prevent extremes of temperature.  The ideal temperature range in a royal python enclosure is 85-88F at one end and 78-80F at the other. It is important to offer a temperature range so that the snake can find its optimum temperature zone. In order to monitor the temperature, it is advisable to have a thermometer at each end of the enclosure.

Humidity is an often overlooked aspect of captive reptile husbandry and is responsible for many of the issues that are seen in captive royal pythons.  Too low and snakes struggle to shed their skin properly, too high and they can develop skin infections ("scale rot") or respiratory infections.  The ideal humidity is 50-60%. This can be monitored with a hygrometer. During the shedding process, it is advisable to provide your snake with a "shed box" which can be as simple as an opaque plastic container filled with damp sphagnum moss.  It is also a good idea to spray the enclosure to temporarily raise the humidity during this time.

Historically, these snakes were well known for having poor appetites but with captive-bred specimens nowadays, these issues are far less common.  All royal pythons feed best on rodent prey with hatchlings starting on baby rats or mice (known as pups and pinkies respectively), progressing through "fuzzies" and "fluffs" and eventually on to "weaner" and adult rats.  If royal pythons are having problems eating, there are many ways to tempt them including warming the rodents before feeding.  It is also advisable to drop a prey size when these snakes are having feeding issues. Some snakes prefer different types of rodent too, with gerbils and multi-mammate mice being the most commonly accepted.

Most breeders feed their royal pythons once per week on suitable prey.  If your snake refuses a feed, do not offer them another meal until they are due their next feed. Two weeks without a meal is not a long time when you consider that these snakes can go for MONTHS without eating in the wild.

Shedding of the skin (or "ecdysis") is the natural process by which snakes heal and grow. The frequency depends on a number of factors including how often the snake is fed and how old it is with younger snakes shedding more frequently than older ones.  During the shedding process, a snake's eyes will turn bluish grey and the scales will become dull. They will normally turn clear again and a few days later they will shed their skin.  In healthy snakes given the correct humidity, the skin should come off in it's entirety like a large sock.  In snakes which are not given the correct conditions, are sick or in some cases for no apparent reason, the shed may come off in pieces or may even be retained. To help remove this shed, a warm, damp towel can be used to gently rub the areas and help loosen the skin.  If the shed is retained over the eyes, it is advisable to seek the help and advice of a vet or very experienced snake owner.

Our emergency service is there for you at any time

Make an appointment with us today

Business hours - consults by appointment only.

Take a look at this month's